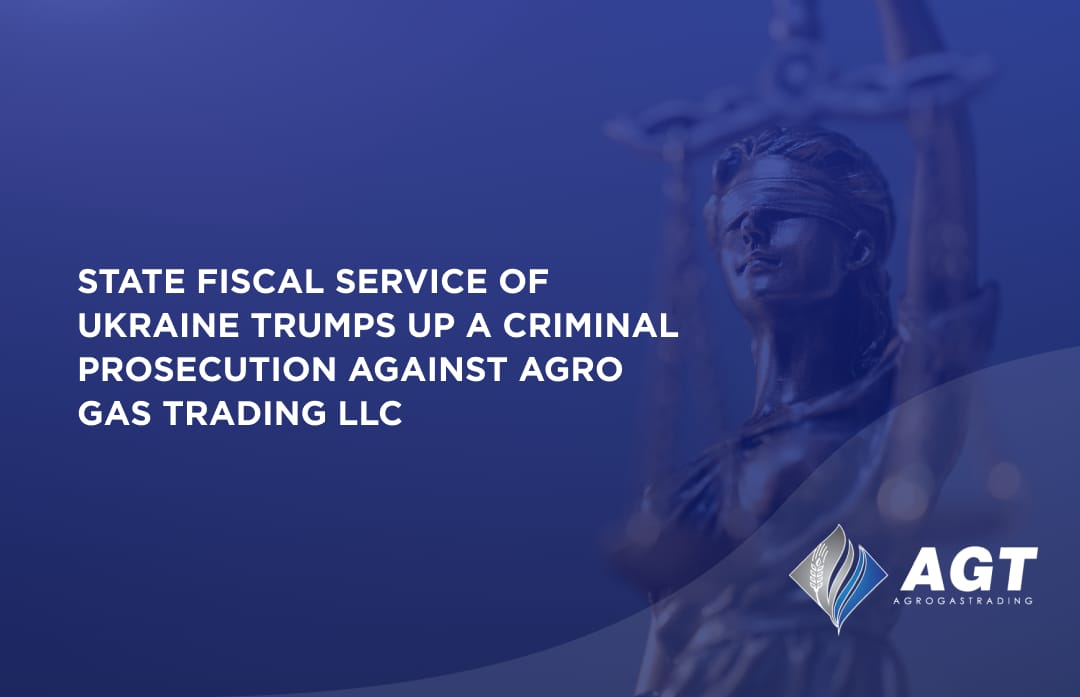 On April 13th, 2021, the State Fiscal Service opened a criminal case against Agro Gas Trading LLC for company’s alleged illegal actions, which led to tax evasion worth UAH 41 million. During May, despite the absence of any previous inquiries, law enforcement officers searched Agro Gas Trading LLC office premises, and during that action, they seized documents that had been repeatedly provided by the company to law enforcement and controlling bodies.

Back when part of the investigative team was at Agro Gas Trading LLC premises, several SFS officers resorted to putting pressure on the company’s CEO. In particular, after the CEO had arrived to the search site, provided officers with explanations, and received an inquiry for questioning, he left, to take care of personal matters. The SFS officers followed the CEO, arrived to his residence, and began to exert psychological pressure upon him, demanding to go with them, allegedly, to clarify questions about the case, but they couldn’t explain what those questions related to. For the next two days, the same SFS officers were near the CEO’s apartment and tried to break into the place where his vehicle was stored. The purpose of such actions by the SFS officers is currently unknown, but our company considers it as a method of proactive illegal influence on the CEO, in order to intimidate him.

Interestingly, a few days before the search at Agro Gas Trading LLC office, the CEO’s apartment was robbed, and on the next working day after the search, the CEO found an unauthorized video recorder and bug device in his office. It is unknown right now whether these facts are related, but the head of the company has filed corresponding complaints with the National Police of Ukraine, to identify those individuals who were involved, and bring them to justice.

Agro Gas Trading LLC is a bona fide exporter of mineral fertilizers. Every month, the company successfully performs document audits made by the tax control officers of the SFS, and receives a VAT refund from the budget. During the last three years, based on the results of the company’s activities, annual independent audits took place, and as a result, Agro Gas Trading LLC has received positive conclusions about its compliance with legal and accounting standards.

The law enforcement agency accuses Agro Gas Trading LLC of illegal sale of carbamide surplus produced at the facilities of the Odessa Port Plant JSC, and of tax evasion. However, the investigation has no current data, witness statements, or control purchase facts that could confirm this. The version of the investigation is based on information taken from foreign websites, and on speculative assumptions made by the SFS authorised individuals, about the amount of natural gas purchased in 2020, and the volume of sales for the same period.

Throughout the history of Agro Gas Trading LLC, the company has always been meeting the needs of regulatory and law enforcement agencies, in any process and providing all documents on request, even if it is a right and not a duty of the company. A criminal case is being fabricated against Agro Gas Trading LLC, and it is based on no evidence and has nothing to do with the legal management of the issue, working on that issue in court and fact-finding.

The investigation uses abstract data of technological processes of foreign plants, but the entire amount of gas purchased by Agro Gas Trading LLC in 2020 is calculated as equal to toll gas, without separating gas as a commodity. Also, they ignored the fact that Agro Gas Trading LLC is a licensed gas supplier in Ukraine, nationwide, and it supplies natural gas to many companies, not only under the tolling scheme for JSC Odessa Port Plant. There is also no account of the important features of mineral fertilizer export, which directly affects the number of products shipped to international partners in 2020.

Over the years, Agro Gas Trading LLC has repeatedly proved the transparency and openness of its business activity. So, acting within the legal field, we will sternly stop any attempts to badmouth our name, and we will stand firm in defending the legitimate rights and interests of the company and each of its employees.