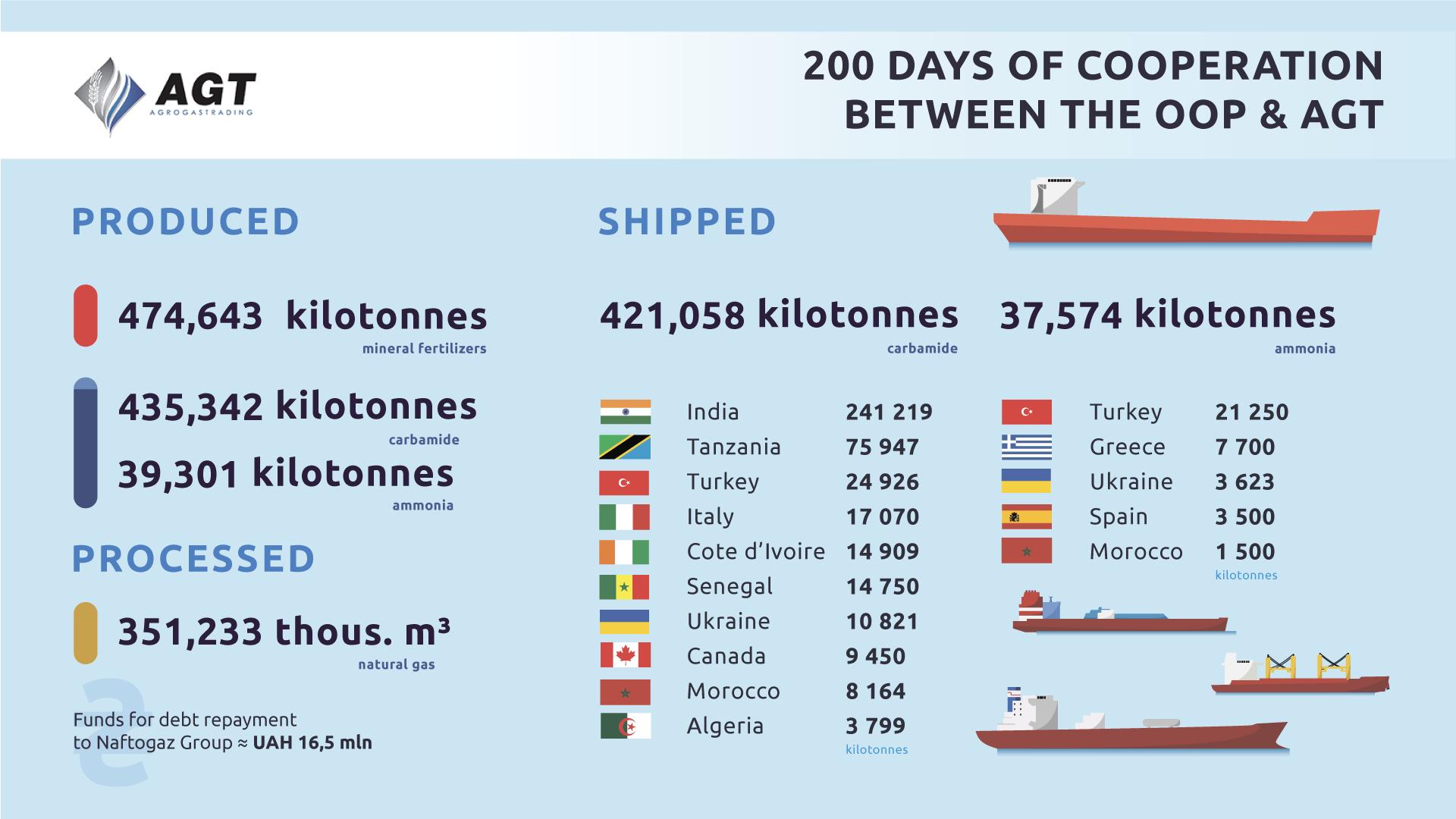 Odesa Port Plant (the OPP) resumed operation 200 days ago after 16 months of inactivity. The OPP has been re-establishing its status as the leader of the chemical industry of Ukraine through cooperation with AgroGasTrading (AGT).

351.2 million cubic meters of gas have been processed at the OPP resulting in production of 421 thousand tons of carbamide and 39.2 thousand tons of ammonia since the start of production, within the framework of the agreement with AGT.

Due to the launch of the OPP, business activity in Odesa region and tax revenues to the state and local budgets were increased. Jobs in related industries were restored and the outflow of well-qualified personnel from the enterprise was stopped.

“Odesa Port Plant, being an essential company for the region, plays a pivotal social role. Cooperation with AGT has allowed the plant to resume operation and provided thousands of employees’ families with wages. We hope that cooperation with AGT will be continued, which will create opportunities for long-term financial planning and guarantee the fulfillment of all social commitments to the OPP’s employees,”  stressed AGT’s partner, Volodymyr Kolot.

Restoration of confidence in the OPP increases its investment attractiveness and simplifies the process of attracting funds to upgrade the facilities of the enterprise. Active export of products enhances the international status of the OPP and Ukraine on the global markets.

The signing of the agreement with AGT was the key to the gradual solution of the problem of the OPP’s debt. Under the agreement with AGT, $1 and $1.5 per a tonne of ammonia and carbamide production were added to the processing cost. Thus, within the first 200 days of cooperation with AGT, the OPP has accumulated additional funds in the amount of UAH 16.5 million to repay the debt to Naftogaz Group.

"AgroGasTrading has been confirming  its status as a reliable partner and responsible supplier for 200 days in a row. Our joint work has allowed the OPP to begin gradual restoration of its status as the leader of the chemical industry of Ukraine, whose products are in demand on global markets, as well as significantly enhance the investment attractiveness of the enterprise and its value before the planned privatization”, informed the managing partner, AGT's CEO Oleksandr Horbunenko.