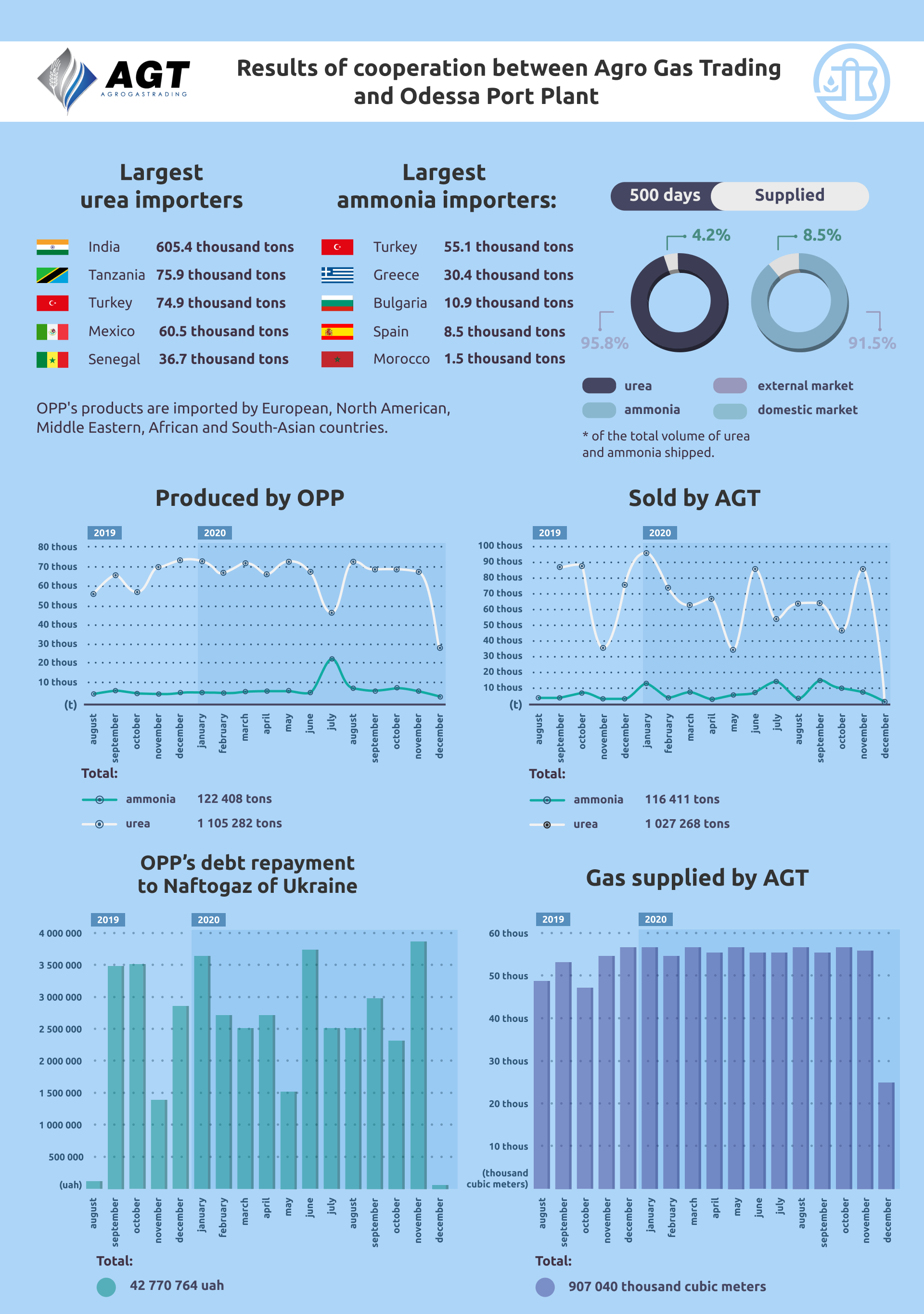 LLC Agro Gas Trading has worked with JSC Odessa Port Plant since the summer of 2019 in accordance with the contract for the supply of customer raw materials. The plant has passed the 500 days milestone of continuous production. The professional approach to work and partnership principles are the basis for cooperation between LLC Agro Gas Trading and JSC Odessa Port Plant, and they have created long-term prospects for the development of the chemical industry in Ukraine.

Over the 500 days of operation, OPP has processed 907 million cubic meters of gas supplied by AGT, which produced 1.1 million tons of urea and 122.4 thousand tons of ammonia. More than 90% of OPP products found their clients in foreign markets. The large sales territory of the plant's products, from North America and the EU to Asia and Africa, makes it possible to have a confident outlook on the future, effectively implementing the short, medium and long-term production and social goals of the plant.

For November 2020, LLC Agro Gas Trading became one of the top three largest nitrogen fertilizer exporters from Ukraine, according to Ukrainian Agribusiness Club. The AGT's share in the structure of fertilizer supplies to external markets from Ukraine amounted to 33%.

The uninterrupted operation of OPP and the additional payments for each ton of actual production, which the contract with AGT covers, made it possible to accumulate funds to pay off debts to Naftogaz Group. As of now, the total payments of OPP in favor of Naftogaz Group have reached UAH 42.7 million.

“The 500-day milestone of continuous production at the facilities of Odessa Port Plant is a prime example of how established partnerships can transform the operation of a company. Over these 500 days, OPP has regained its status as one of the leaders of the Ukrainian chemical industry. It has been actively increasing the export of products to new markets while conscientiously fulfilling its obligations. It can be certain that reliable and fruitful cooperation between AGT and OPP will enable the achievement of ambitious goals in the future and also contribute to the development of the entire Ukrainian economy,” said Oleksandr Gorbunenko, managing partner of LLC Agro Gas Trading.

The current contract for the supply of customer raw materials between LCC Agro Gas Trading and Odessa Port Plant JSC is in force until the end of 2020. During this period, AGT will fulfill all the obligations assumed before OPP in full compliance with the clauses of the concluded agreement. AGT is ready to continue cooperation on mutually beneficial terms with OPP after the end of 2020.

“The achieved result has demonstrated the choice of the correct strategy for developing our partnership with OPP. The situation on the plant has improved significantly, production is constantly growing, and wages and salaries are being paid on a regular basis. Five hundred days of stable operation of OPP inspire confidence that all ambitious goals will be achieved,” said Volodymyr Kolot, partner of LLC Agro Gas Trading.