AGROGASTRADING AND ODESA PORT PLANT: 300 DAYS OF HIGH-PERFORMANCE PARTNERSHIP IN THE INTERESTS OF NATIONAL INDUSTRY 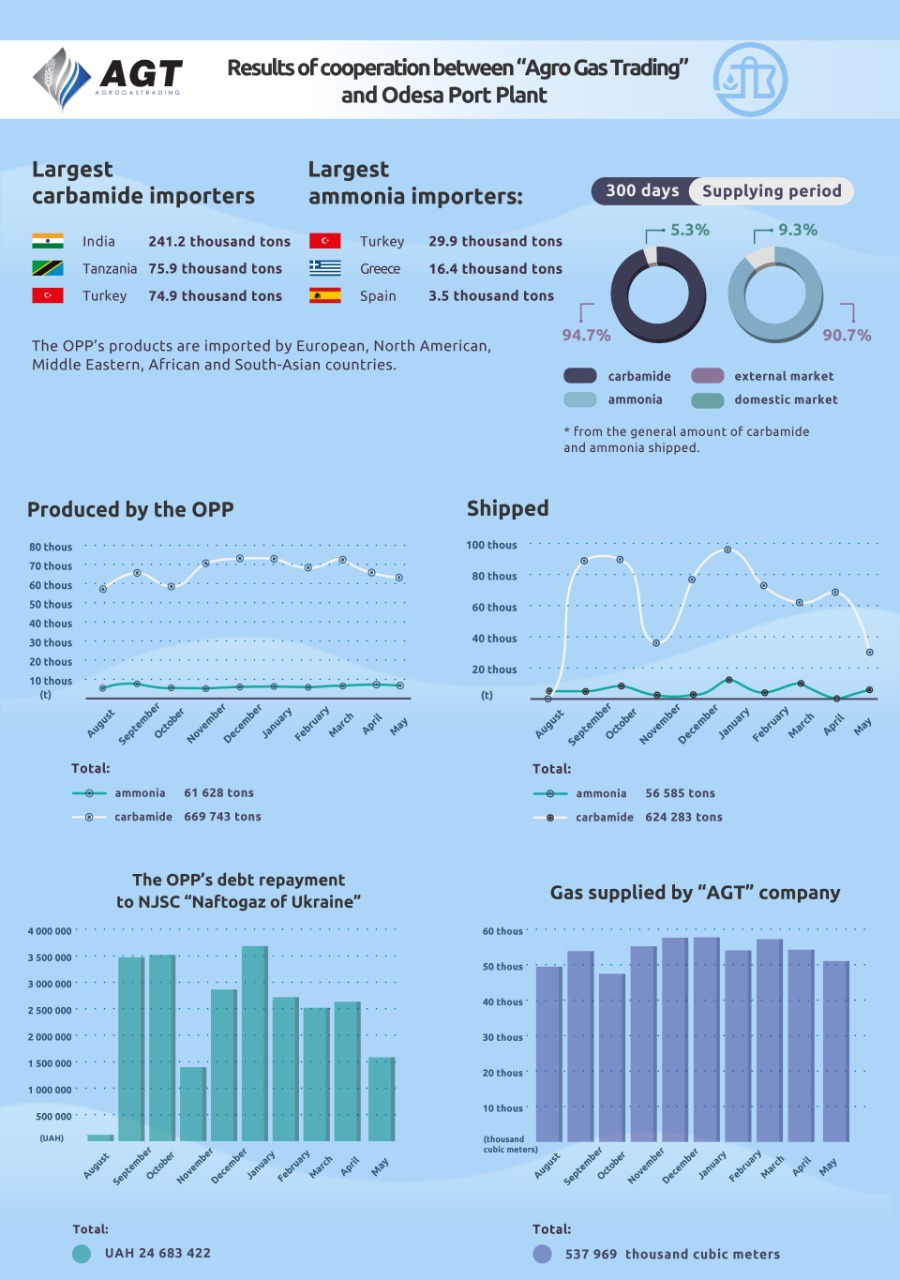 PJSC "Odesa Port Plant" has been operating for 300 days now, since it resumed its work in August last year. Cooperation with AgroGasTrading LLC allowed the enterprise not only to return to work after almost a year and a half of downtime but also to return confidently the status of one of the key chemical industry companies of Ukraine and save for itself an important place in the world market.

Since the plant resumed its operation, within the framework of the tolling agreement with AGT, 538 million cubic meters of gas has been processed, of which they produced 669.7 thousand tons of carbamide and 61.6 thousand tons of ammonia.

Resumed operation allowed the OPP to regain the status of a competitive player in the international arena, with high-quality products sold in the markets of the EU, North America, the Middle East, Southeast Asia, and Africa. 88.3% of manufactured carbamide and 83.3% of ammonia were exported within these 30 days of work.

"The partnership between the OPP and AgroGasTrading has been going on for almost a year. The smooth and efficient operation of the OPP, its manufacturing and financial indicators also demonstrate the efficiency of our cooperation. We are interested and ready to continue the mutually beneficial and reliable collaboration that is the key to the long-term development of the plant," said Alexander Gorbunenko, Managing Partner and CEO of AGT.

The continuous operation of the company was the key to starting the process of repaying the debt to the "Naftogaz of Ukraine" group, accumulated in previous years. UAH 24.7 million was allocated for debt repayment. We managed to accumulate these funds due to the current contract with AGT, which provides for the payment of an additional USD 1 per ton of ammonia produced and USD 1.5 per ton of carbamide.

The results of the OPP are not only about the financial indicators. An important achievement was the provision of a stable and timely payment of staff salaries. This made it possible to return the key experts to work at the plant, those who were forced to resign during the downtime. From April 1st, during the quarantine announced in the country, the salaries at the OPP were increased by an average of 10%.

"The opportunity to contribute to the revival of the Odesa Port Plant, the flagship enterprise of the chemical industry of our country, is a great honor for AgroGasTrading. Our joint work created a solid foundation for the further development of OPP; its products are now in demand around the world. We kept and returned the jobs and ensured stable revenues to the state budget and Odesa region in particular. AGT will remain a reliable partner for the company, ensuring compliance with all conditions under the current contract," said AGT partner, Volodymyr Kolot.